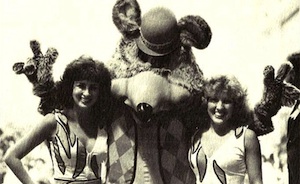 Securing Chuck E. Cheese's in the annals of Silicon Valley innovation, The Atlantic's Alexis Madrigal interviews the founder to tell the remarkable story of the pizza arcade chain. Nolan Bushnell, from his vantage point as founder of Atari, saw better economics on the arcade side so he personally constructed everything from animatronic characters to pizza recipes to create the ultimate venue for generations of kids.

Lest you think that the window of opportunity for gameroom innovation closed long ago, see how a 9-year-old boy in East LA created a global phenomenon with his cardboard arcade.

Early childhood behavior, long suspected of being linked to parental drinking, may also relate to alchohol problems for the child later in life. A research study at VCU sugggests that early childhood personality may increase risk of future alchohol problems. Kids with behavioral problems are at risk, kids who are "consistently social" at even greater risk. The group at highest risk by a wide margin: Kids who could reliably bounce a quarter off the table into a plastic cup.

Ernst & Young surveyed women in senior management at large global companies, finding a big correlation between sports and career sucesss. 90% of the women surveyed (96% of executive officers) played organized sports in school. An impressive testament to the broader effects of Title IX over its 40-year tenure. And of course in women's sports there are breasts, and their associated controversies.

Researchers at UMass Medical School successfully shut down the chromosome associated with Down Syndrome, a breakthrough that may lead to development of drug treatments to partially restore normal brain function in adults, children, and potentially even during pregnancy.

Italian researchers used a neutralized version of HIV to replace defective genes causing two rare but fatal genetic diseases, improving prospects that such gene therapy could be used to treat AIDS, leukemia, and other diseases.


On Trial in Kentucky: Raising Kids the Old Fashioned Way


Physical Punishment Getting a Beatdown

Speaking of old-school parenting, University of Manitoba researchers surveyed thousands of American adults, asking whether they had experienced "pushing, grabbing, shoving, slapping and hitting". Those who had were more likely to have experienced nearly every type of mental illness and drug abuse. George Holden, a professor of psychology at Southern Methodist University says this study fits into a "large constellation" of studies that show children whose parents use physical force are at greater risk for depression and anxiety. Yet still 80% of American parents rely on corporal punishment to some extent.

Coming soon, Filip, a wearable device that allows you to track your kids' location. They can also make and receive calls from an approved list of contacts. Presumably the batphone is pre-programmed.


What a Difference a Year Makes

I thought I was obsessed with photographing our son Oscar, who just turned one. English photographer Sam Cornwell, whose son Indigo was born two days later, took short videos every day for a year and strung them together. Watching it brought back a lot of fond emotions that have developed over the past year. It really is amazing how much we develop in our first year.

More Editions of the Parent.Cc Newsletter